A New Calf and Other Happenings 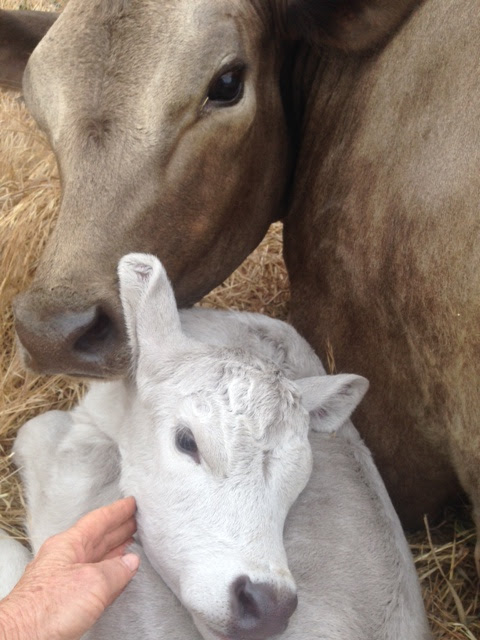 Baby Asher made her way into the world without a hitch on the night that a bush-fire had caused havoc, just over the hill from us, earlier in the day.
It was a tense day. Brian had gone with his fire unit to assist in dousing the flames while I actioned our fire preparation plan at home.
We were exhausted after the day, running on fear and adrenaline, and needed sleep more than anything.  It was during our evening rounds, locking up the poultry into their night sheds, when we noticed Poppy was in her early stages of labour, five days early.
A new form of anxiety then set in, I'm always fearful of birthing difficulties in new heifers, so sleep was the last thing on my mind.
What a hot night it was. The daytime temperature was 43C degrees and fiercely windy, hence the fires sparking up in all over our district. The evening was still hovering around 39C degrees and although the wind had dropped, it had blown in billions of flying insects that clung to the torch beam and found their way into my shorts, rubber boots, t-shirt and bra every time I walked down to check on Poppy's progress through labour.
At 11pm, just 40 minutes after my previous inspection, I found Poppy licking a perfect little silver heifer calf. It was a perfect delivery and, feeling extreme relief and highly emotional, I took myself off to shower and fell into bed. 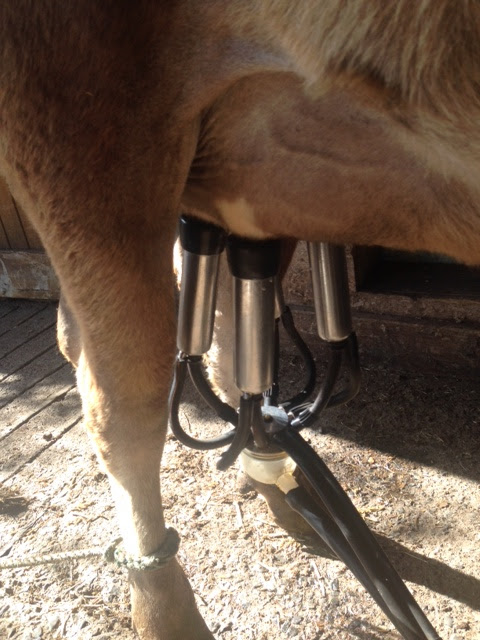 Three days after calving Poppy was eager to trot into the milking parlour, while leaving her calf to sleep in the grass. I had begun training her to be a milking cow when at just five days old we brought her home from a friend's dairy to raise here on our farm. Over the ensuing two years her and I have developed a firm trust in each other, and this trust and love was evident when I put the milking cups onto her teats for the first time.
Her udder is tiny compared to Lavender's which is ample and pendulous, having fed three calves and supplied hundreds of litres of milk to us over her six years. 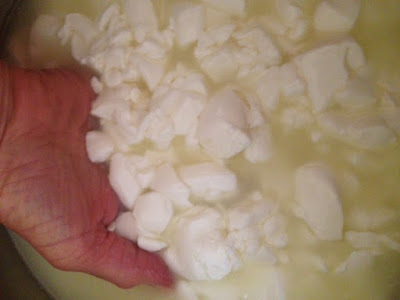 Today I have a batch of feta cheese on the go from the combined milk of both cows from this morning. 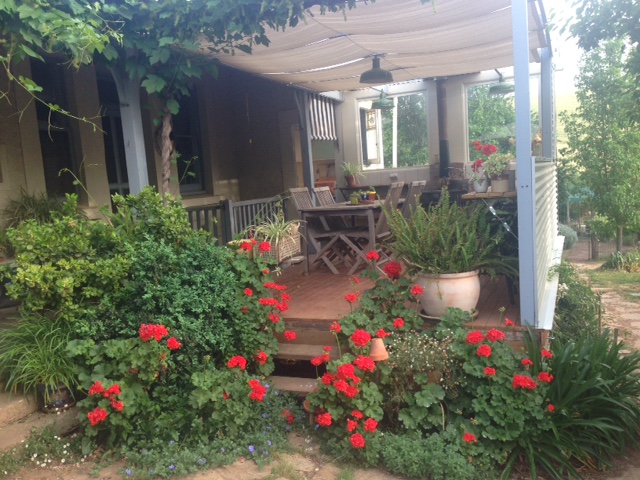 In other news, I completed sewing the shade panels for the outdoor kitchen/deck.
I planned on buying some light canvas from Spotlight to make up panels that can be removed and stored after summer is over. We enjoy the warmth from the sun during winter.
How lucky I was that Aldi just happened to have painting drop sheets out on special the week before my planned trip to Spotlight. I bought four at the knock down price of $10 each, and all I had to do was trim and hem one side of each drop sheet and sew a pocket at each end for the curtain rod to slide through.
However, the trip to Spotlight could not be averted as there were rods and brackets to purchase but, as usual, I had a list of things to purchase whilst in the 'Burbs', a forty minute drive from here. 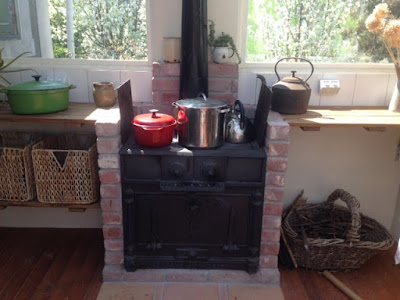 The outdoor kitchen is useful when it's too warm to light up the wood stove in the house. 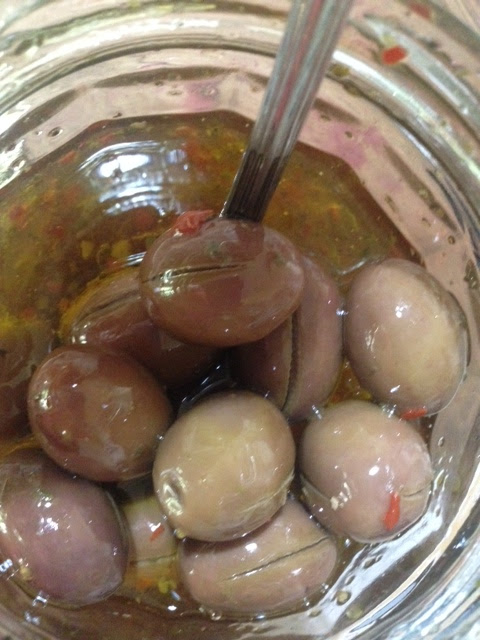 One of the highlights of the past months has been meeting my blog friend Tania and her husband Phil. If you don't already know Tania you can read her blog  Outback  here.
It was an early morning catch up over a cuppa when they came to buy some bees from us.
I experienced Tania's true country generosity when they arrived loaded with jars of Phil's pickled olives, two of Tania's home made Quondong pies, (otherwise known as Native peach) and lots of Quondong seeds for us to plant in our gardens.
The olives are the best I've ever tasted Phil,  better than those I pickle myself, so I'll be looking on Tania's blog for the recipe next olive season. 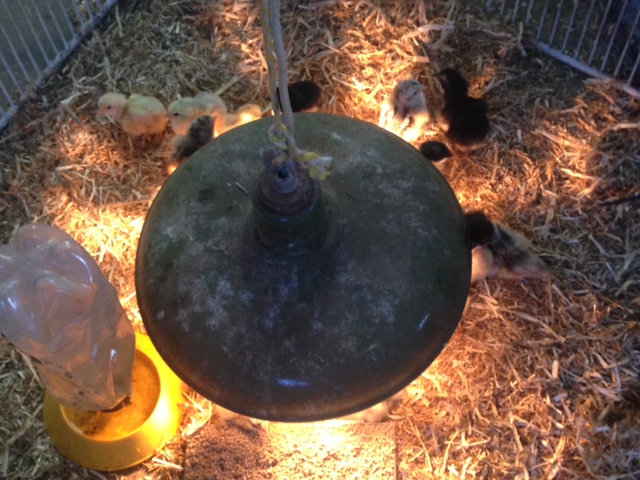 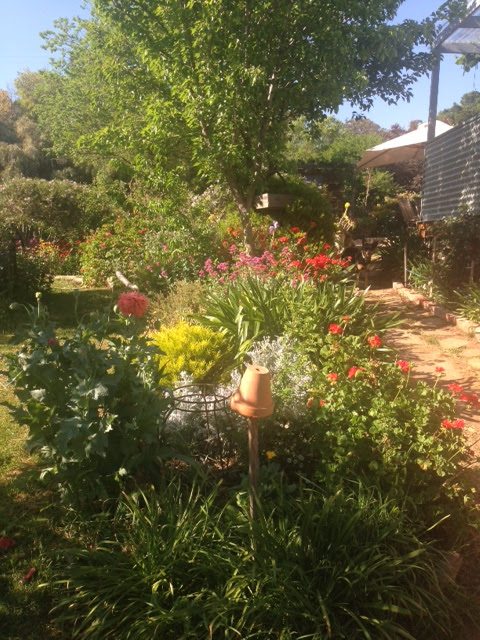 Summer is here and thankfully we have had a slow start to long stretches of really hot weather. They will come though and my garden will dry out and go into limp mode, just surviving, until the rain arrives next autumn. I always snap a few pictures to remind me of the good times when 'the dry' starts to get a bit much for everyone's mental health.
Earwigs are destroying almost every new vegetable seedling I plant in my small patch near the house, and I'm reminded that, in the past few years, they have been at their worst  and most destructive early in the season. So, I'll plant again in another few weeks and hope for better success then.
I just can't imagine a summer without a glut of cucumbers, zucchinis and capsicums.
Brian's rows of tomato plants are doing well down in the big vege garden where the Jap bantams roam and keep the earwig population under control. The Pekin bantams up here in the house yard are a bit too well fed and don't seem to be working at earwig control as they should be. They redeem themselves  however, with their cheeky personalities and good looks.
So here we are, December already. I hope to catch up with a bit more blogging this month so I won't share Christmas greetings just yet.
Thanks for dropping in.
Cheers for now,