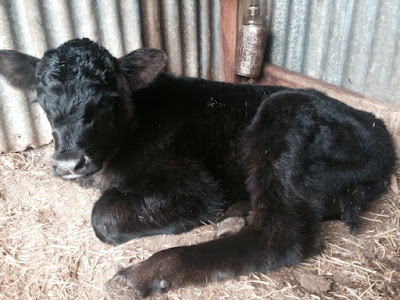 Gordon spends most of his time dozing. The other few minutes of the day is for drinking his milky calf mixture. 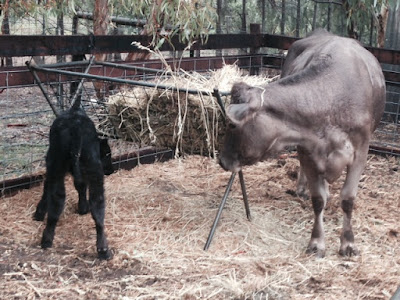 And exploring... "Can I walk under this thing?" 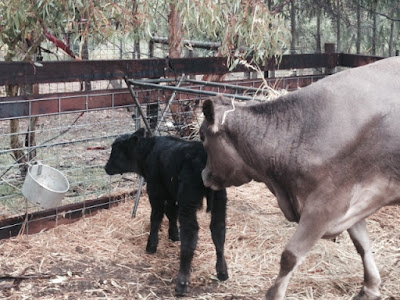 Lavender is checking him out with interest. "Where did this new baby come from?" 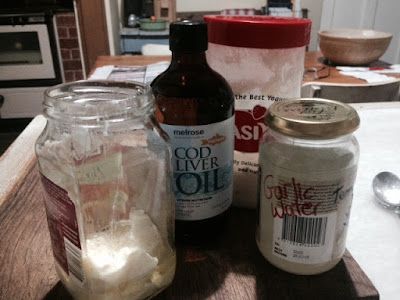 Brian collected the new calf yesterday on his way home from work. So as soon as we unloaded him from the ute, I slipped an Arnica pillule under his tongue. It's a big shock for a wee calf to be loaded onto a vehicle and taken somewhere new. This can have a negative impact on the health of a young animal so last year I started using Arnica, for calming,  and I really believe we are having better results with the health of the calf in those first few days.  If I had been there to collect the calf, I would have given him a pillule before loading him onto the ute and then another one after we unloaded him at the other end of the short five minute journey.
He was put into the small calf shed that is enclosed on three sides, the open side faces away from the weather and has a gate to keep him inside and under shelter. On the first night here in his new home, he will be disoriented and I don't want him getting cold or wet.
He was left on his own for an hour to settle in, before I gave him his first feed. He was born on Sunday morning so he was three days old when he came here and I could see that he had already learned how to drink from a calf feeder, so he must have been removed from his mother when he was less than two days old. This is not enough time for a calf to get the colostrum from his mother, to build the antibodies for his immune system, but it seems to be the common practice in large dairies, so we just have to work around it.
His first few feeds are the most crucial for building up his undeveloped gut, thus preventing scours in these first few weeks. Scours can be fatal if not treated promptly, and is even better if we can prevent the calf from getting scours in the first place, but it's not easy. Raising new born calves can be tricky.
I have developed a newborn calf colostrum for feeding in the first three days.
1 dessertspoon Cod Liver Oil
2 dessertspoons plain yogurt (my home made stuff)
1/3 cup of garlic water *
1 teaspoon Dolomite (calcium and magnesium)
[* To make the garlic water.. put 1 teaspoon of crushed garlic into a 350ml jar, top it up with water and shake well. Let sit for at least three hours (the garlic solids will settle to the bottom) before pouring off half a cup without stirring it up. Remember that we are feeding the calf through a teat and don't want lumps. This amount will be enough for approximately four feeds. Then top up the jar again and use it the same as before. After the second time it will lose most of its value so tip it out to the chooks and mix up another jar.]
Put the above contents into a large jar (600mls) with a cup of milk and shake it well to mix.
Add the jar mixture to 1 litre of milk and 1 litre of water in the calf feeder. The drink should be at body temperature for the calf.
After three days I'll start to increase the milk ratio of the mix. eg, more milk, less water to total 2 litres for each feed.
In the beginning I made the mistake of over feeding the new calves. This is the worst thing to do as the little gut just can't handle too much at once, however they will keep drinking even though they have had enough. This is the suckle response that makes them want to keep suckling after getting their fill. Don't be fooled by them, let them suckle on your finger if you want to, but give no more milk when they are very young. This mistake will result in very runny yellow poo which can quickly become white runny poo and then (horror!!) grey scours poo with blood in it. Then we're in trouble!
The calf is fed this amount twice a day, preferably twelve hours apart. I feed my calves at 6pm and I am then sure to be woken for a feed at 6am. This suits my timetable and the rhythm of my day, but you may prefer a different schedule. After the first week or so, I am a bit more flexible with the gap between feeding, an hour either way, because by then they are able to drink water from the bucket provided in the yard if they feel thirsty. During these first few days they are relying on us for their feelings of hunger as well as thirst. If the weather is very hot, it is wise to offer a drink of plain water in the calf feeder during the middle of the day. It won't take long before you can teach the new baby how to drink water from a bucket or trough as described in a previous post here
We are hoping for Gordon to be adopted by Lavender, so they are spending time together in a separate paddock from the other cows.

Thanks for all of these great suggestions for a name for this little bloke...
Angus - we have already had an Angas. I thought of Gus, but my friend's new grandson is Gus, and probably not appropriate to name a calf the same name.Thanks Joolz.
Jem- we have already had a Jemima, shortened to Jem. Thanks Merryl.
Boris- great name and it was a toss up, and I think our next boy could be a Boris. Thanks Sue.
Nana Chel, I think Gordon is perfect for this calf. Thanks :)