New Calf Paisley (and other matters pertaining to calves) 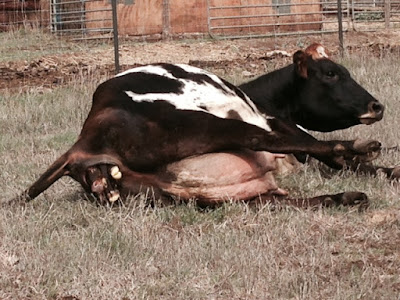 This is Daisy's third calf and it seemed like "one, two, three" and out slid the perfect little heifer calf.  The wonderment and the sheer miracle of birth doesn't diminish even one little bit for me, no matter how many births I witness. 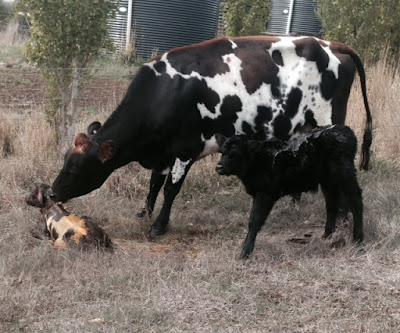 We immediately brought Gordon to the scene and smeared some of the watery membranes onto his fur.  Daisy was extremely busy with her precious baby for the first hour or so, but she did lick Gordon and quietly moo-ed baby talk to him. However, Gordon was taken from his mother three days ago and is now associating his feeding with a grey haired lady human, not a bovine mum, so I have been working at imprinting cow mums into his little brain by feeding him as close as possible next to either of the cows.
We thought it might be easier to convince Daisy to adopt Gordon as she will usually take another one or two calves while she has her own calf.
It's much more difficult to expect a cow who has already weaned her calf, to take a foster calf, as is the case with Lavender, but we wanted to give it a try. Some cows will do it, but they are the minority, and if we don't try it we will never know if Lavender is one of "those" cows.
So at this point in the proceedings, it could swing either way as to which cow will allow Gordon to suckle.
Tomorrow Daisy and her calf Paisley, and Gordon, will be released into the cow paddock with the other cows. There they will sort it out for themselves and we will wait eagerly for a few days to see which cow allows Gordon to take a sneaky drink. He's still such a shy little boy, and he needs to grow a bit more before he develops enough attitude to attempt taking a sneaky little drink from one of those udders. Of course I will continue with his feeds from the calf feeder until we are certain he's getting enough milk from elsewhere.
Tonight we brought Daisy into the dairy and milked ten litres of rich colostrum from her huge udder that looked close to bursting. There looked like being at least another ten litres in there but she held it back and stopped the flow. This will keep her feeling a little more comfortable and will allow the calf easier access to her teats if they are not so engorged.
Gordon got to drink some of the colostrum mixed with his normal mixture of cod liver oil, garlic water, and dolomite. I left out the yogurt and will remove the cod liver oil from his feeds from tomorrow, but will closely monitor all of his poos every day. If he starts to get runny smelly poos, I'll bring back the yogurt and garlic water into his milk mix. 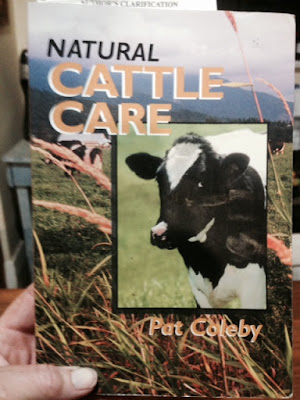 Apart from lots of research over the years, and what I've learned about cows from our experiences, this is my go to book for all things farming and animal care.
I have a great regard for Pat Coleby and have gained lots of knowledge from her many books on organics and animal care using natural methods. I would recommend this book to anyone who wants to know how to treat common ailments naturally and how to care for the soil and pastures. 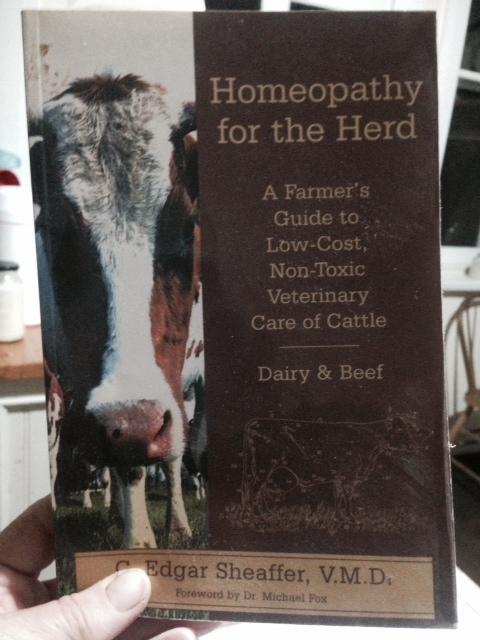 Another valuable book in our library which has simple remedies and case studies.

A couple of comments from my last post regarding colostrum which I'd like to respond to here for your information.
From Liz at Eight Acres blog
My understand of colostrum was that calves need it in the first few hours of life while their stomach lining is open and can pass the antibodies into their blood. The closes quickly and after that colostrum is less effective. So I thought that as long as they get colostrum early that's all they need..... however that is just from reading conventional info, so I'm interested in your opinion on this one! Great tip with the arnica, can you share where you get the pillules?
Liz, this is also what I knew in the early days from the conventional farming aspect, but with a high percentage of my brought in calves developing serious scours I started to look for more information and remedies that didn't involve antibiotics and pharmaceutical treatments.  I gleaned lots of interesting information from organic farmers and our Bio-dynamics workshop days, which started to all make sense to me. It was about building the gut immunity in the young animals to set them up for life. In nature, the calf gets all of the colostrum from the cow which is generally three days before the real milk comes in.
In conventional dairy farms, the cows are milked four times, morning and night, before the milk is allowed into the vat with the other milk from the dairy. So this ties in with the three days of colostrum theory. The colostrum is natures way of providing all of the antibodies for the calf.
Giving a calf the colostrum from a cow other than its mother is also not effective at providing what the calf needs. When the new mother cow is licking the urine and faeces from her newborn, her body is reading the requirements of that particular and unique calf,  adjusting her colostrum to provide everything that the calf is lacking.

And thanks Mereth for your comment;
In a conventional dairy, when the calves are removed soon after birth and fed colostrum from the various other cows that have recently calved, the calf is still not getting the correct colostrum that was designed for him as a unique being.

I feel so very privileged to have access to milk from cows that are treated organically as whole beings, who don't suffer the stresses of separation  from their calves, and are shown the respect they deserve.

Thanks for your comments, I really love reading each of them and appreciate you taking the time to write one.

Have a wonderful weekend dear reader.