When is a lamb not a sheep? 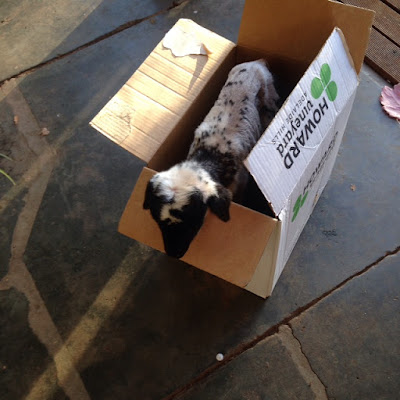 The phone call from a complete stranger came late one evening last week. His ewe had not accepted one of her twin lambs. What should he do?
Bring it to me of course.
So this box full of lamb arrived early next morning. 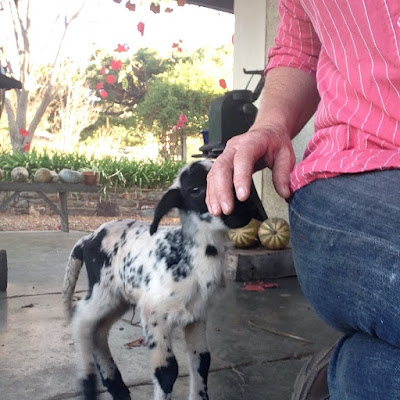 But "oh oh" he's not a real sheep.
We were not sure what breed he was, but he looked like a cross between a sheep and a goat.
His umbilicus was still very soft, pink and fresh, so I sprayed iodine on the base at his stomach to prevent infection. This (infection) occasionally happens to a young lamb at a week or so old, when otherwise they appear perfectly healthy. One leg becomes stiff and then another one becomes stiff, until there is nothing that can be done for the animal except euthanasia. I have had two cases of this in the early years, until I researched and found that it was caused from an infected umbilicus. I always keep iodine on hand now and spray it routinely on any new born that comes into my care.

I mixed up a lamb colostrom for him because the owner said he had not had a drink from his mother.

His suckle reflex was strong and he drank willingly so I offered him a small drink every two hours throughout the morning. By lunch time he had finished all of his colostrum mix. Then I fed him a small amount (approximately half a cup) of plain cow's milk three hourly. 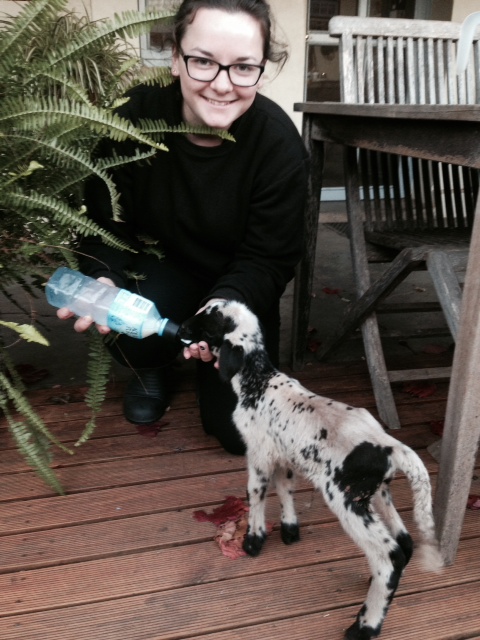 Number one son's partner fell in love with him immediately of course.
He is a Damara breed, otherwise known as "Fat Tail" sheep.They don't have wool, and are perfect for landowners who don't want the bother of shearing and crutching.
A phone call to a neighbor with young children, who are already raising a pet lamb that needs company, sealed the deal on finding him a permanent home.

Why couldn't we keep him?

As Merino owners, our wool clip is valuable to us each year, and running a black sheep of a shedding variety with our sheep would contaminate the merino wool, rendering it near to worthless.
Brian was not going to let me keep this gorgeous little guy.
More about Damara sheep