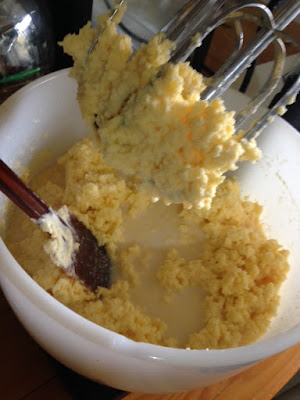 Our butter for the coming week. This batch is cultured and oh how lovely it is to make because it "turns" very quickly with hardly any beating at all.
I haven't been separating Daisy's milk lately for two reasons. Firstly, I had been over dosing on the cream and my clothes were feeling tight, and secondly, she is not giving as much milk now; averaging six litres a day.
I'm feeding Rosie a supplement feed each morning to make sure she is getting enough milk. I doubt she is getting enough from her sneaky raids on Lavender's udder, and this makes me feel better knowing she is getting two litres every morning from the calf feeder.
So I've only got four litres of milk to bring back to the kitchen each morning at present.
However, during the months of excess milk and separating the cream, I had stored lots of it in the freezers to have on hand for this time, so I can continue to make our butter during times of no cream.
I took some cream (approx two litres) from the freezer yesterday morning and let it thaw on the kitchen bench all day. Frozen cream is fine for butter making and using in cooking, but it doesn't make nice ice cream or for eating after it has been frozen.
My guide to butter making here.
Last night I stirred a dessertspoon of yogurt into the thawed cream and left it sit on the bench over night to culture.
The cultured butter milk is an added bonus and I will use it for baking or for a cheese starter some time over the next few days. 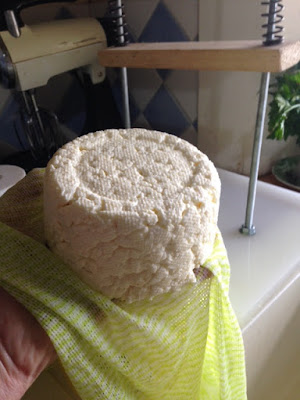 I have also got a batch of Feta on the go this morning and am stirring it with my hand every five minutes while I write this. I cheated with the above photo, that is not today's cheese, but "one I prepared earlier".
I'm wondering if anyone else is having issues with Mad Millie rennet tablets.  I'm finding that often, the cheese is not coagulating (setting) in the required time and I have to add another rennet tablet which puts the whole process back by at least another hour or two. Already I'm using half a tablet above what the recipe calls for, and today, I've used a total of two and a half tablets when the recipe actually called for one tablet!  Just as soon as I can get to the "Big Smoke" shops I'll be making the switch to liquid rennet. I really like to have rennet in the tablet form as it stays stable (supposedly) and is easy to store without refrigeration, but I'm really getting tired of the inconsistency.
I will be running a cheese making workshop here next week and as the time is limited to four hours I can't be taking the risk of the rennet not coagulating in time. 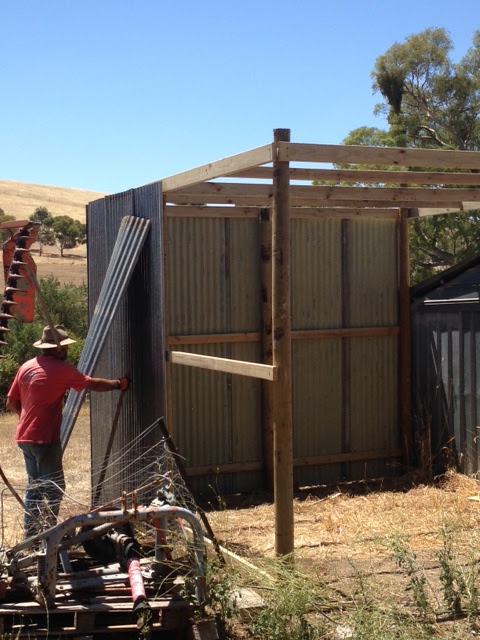 The "new" tractor is so high it doesn't fit into any of our sheds. We want to look after this large investment and are hoping it will be the last tractor purchase we ever have to make.
So Brian whipped up a shed over the weekend! Yep, I know, most people would take weeks to build this, but he's one of those blokes who gets an idea and has to work until it is finished.
He gathered the supplies of timber during the week. On Friday evening he dug the holes with a digger borrowed from friends who had hired it for the day and finished with it earlier than planned. (Bonus)!
The tin was from his stack that he has gleaned over some months from other people replacing their roofs. (Roofs doesn't sound right, but spell check tells me that "rooves" is incorrect and far be it from me to argue.)  A bottle of wine or a tub of honey is traded for the iron.
All of our sheds are built this way to make them look old and to fit in with the sheds that were already here. 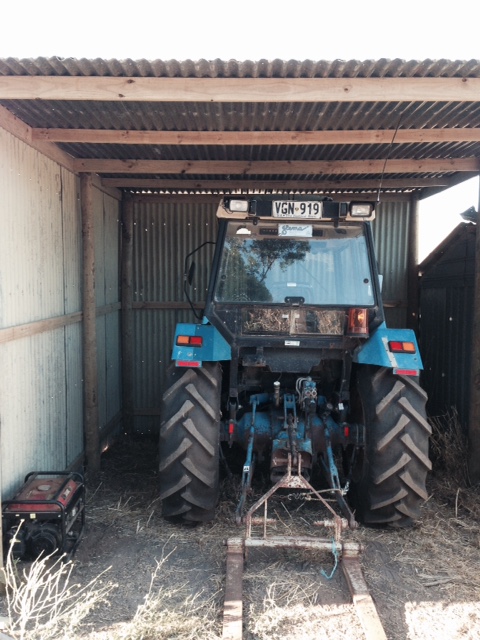 Just the eastern side to fill in the gaps, but mostly it was finished by Sunday evening. Phew, it was exhausting just watching him and getting him to pause to eat a meal. 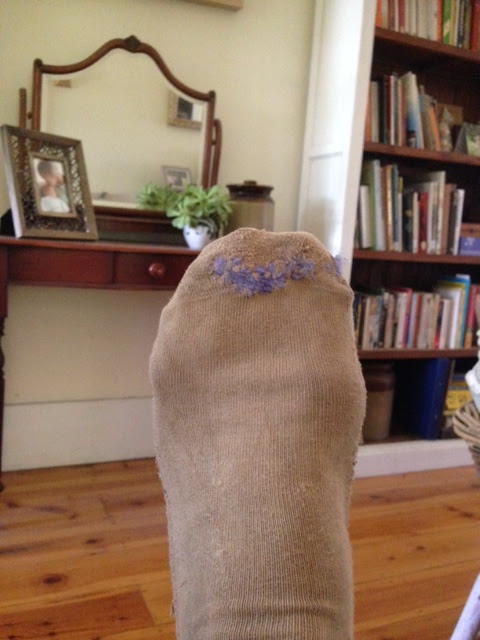 And finally!  When I've gone to all the trouble of darning a sock I'm not shy about the darn being visible. Celebrate the darn I say!
Do you mend your clothes? Darn your socks?
Truth be told, these socks were from one of my favorite op-shops and cost 50c over a year ago. Now they will go on keeping my feet comfy for another year.
Cheers for now and I hope your days are full of things that make you happy or content.