Garden trickery- how it makes us feel 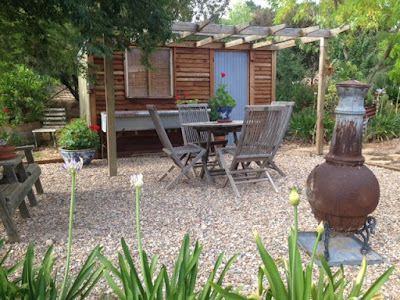 I thought I should come clean about the background photo on the home page of this blog.  It now looks like this.
The cottage garden with its geraniums, artichokes, lavenders, agapanthas, marigolds and daisies was delightful in winter and spring, but during summer it looked sad.
For the first couple of summers I painstakingly watered it all daily, (picked myself up off the floor each time the water bill arrived), and waited for the autumn opening rains to revive it all again.
This kind of behavior was not sustainable and I grew tired of looking onto this sad patch of garden all summer. As it's directly outside the kitchen door where we see it before we see anything else, it was a depressing sight which made the heat of summer not only physically hard to bear but visually as well.
It is true that visual things affect how we feel. 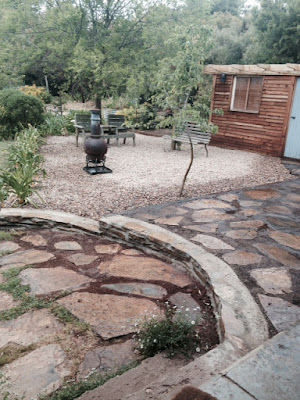 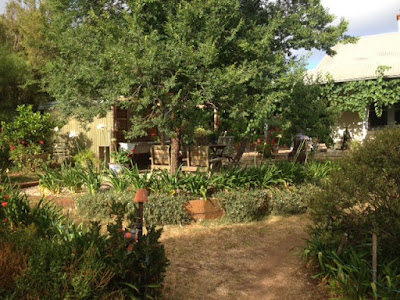 Into our third day between 38 and 44 degrees. The plants are stressed but this is normal during our harsh summers and they return to their former glory in Autumn. I give them only just enough water to keep them alive. 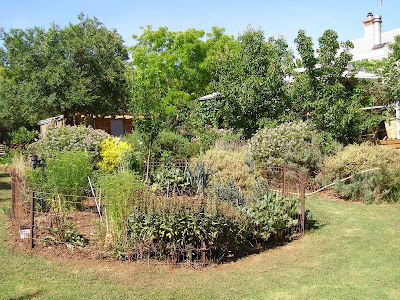 The "lawn" doesn't look like this at the moment. It's dead, but the gardens are still serving their purpose and creating an illusion of green.
When we first moved in here we had not planned on putting in as many gardens. We wanted to concentrate on growing more fruit trees and put our energy (and water) into vegetables and food.
However, with two large and active dogs, the expanse of the house yard that was Kikuyu "lawn" during the wetter months, became a dust bowl over summer. Watering and maintaining a lawn all year is unsustainable and was never an option for either of us.
For my own sanity I needed to give the visual impression when looking from the house, that there was not a dust bowl out there so I started planting curved swathes of garden beds with low maintenance shrubs and plants that required little water. I did all of the planting in Autumn of course, so the plants had all winter to get their roots down deep. They were watered for their first summer and whatever plants did not survive were ripped out and other hardier plants replaced them.
This had two advantages; the visual effect from the house kept the house yard looking green and cool all year, and the smaller areas of Kikuyu "lawn" were easier for mowing.
I watched the weather patterns during our first year. Where does the sun come up? Which parts of the house get the hottest in summer? Which direction do the winds come from? Where do we prefer to sit outside for a cuppa or evening drink? Which windows are affected by the hot sun? Which rooms are dark and which are light?
With all of these things in mind I planted the two Manchurian Pear trees on the Eastern side near the kitchen deck to give us morning shade during the hot months. In winter the leaves have fallen, letting in the winter sun and much needed light.
We planted Glory vines on the east and west verandas to shade the windows in the mornings and afternoons during summer whilst letting the winter sun into the house in autumn and winter after the leaves had fallen.
There was already an old peach tree growing outside the kitchen so Brian built the deck around it. Its shade in summer, and ease of picking peaches from the deck is much valued. 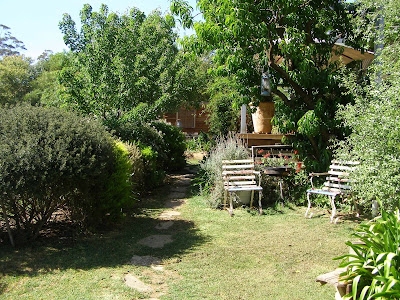 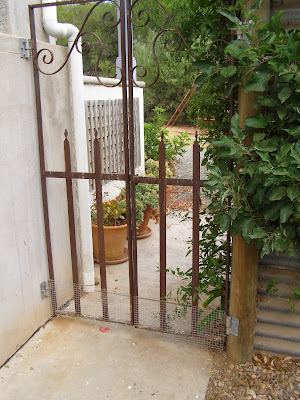 It's not a show home or garden. We have to function here, our dogs need to run and play (and dig), we need to go about our work in a practical way. We don't have the time or energy to be too precious about it, but we get great pleasure from the seasons and watching how the garden evolves.
Well..... perhaps I don't get quite as much joy from hot summers that scorch everything to a crisp, she says between clenched teeth.
Maybe tomorrow I will need to turn on the split system air conditioner as we have our fifth scorcher  day in a row but, so far, the inside of the old home is still comfortably cool.
I hope you are finding ways to stay cool if you are in the midst of summer where you are.
How many days until Autumn?
Posted by Jembella Farm at 20:43