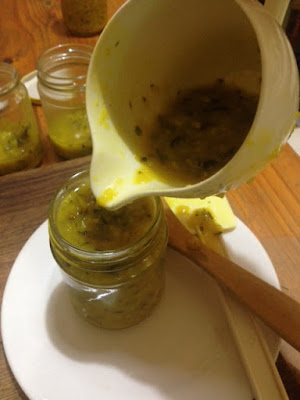 Beautiful fresh zucchinis (courgette) are starting to pile up on the bench and in the fridge so it was time to make relish.
First, I must say that we try very hard to eat our garden produce in its most natural and nutritious state of rawness (first choice) or lightly cooked.  We're enjoying zucchini sliced in  tossed salads, chopped in coleslaw, lightly cooked in garlic butter, in our fresh juice with carrot and apple, in quiches, frittata, lasagne, zucchini and walnut cake.... but still they keep building up.
I did a search through my old posts to find Zucchini Relish and within just over one hour there are no zucchinis left in the fridge and a dozen jars of relish cooling on the table.
I've made a couple of changes to the recipe though, adding some coriander seeds and some salt, which I have amended on the original post.
So if life gives you lemons, make lemonade; but if life gives you zucchinis...well you know what you can do.
Wishing you a long and fruitful zucchini season..Ha! That's all very well to say now, but it's just the beginning of what looks like a bumper year for the humble zucchini. Ask me again in another month and my words may likely be uttered through my teeth.
Cheers X 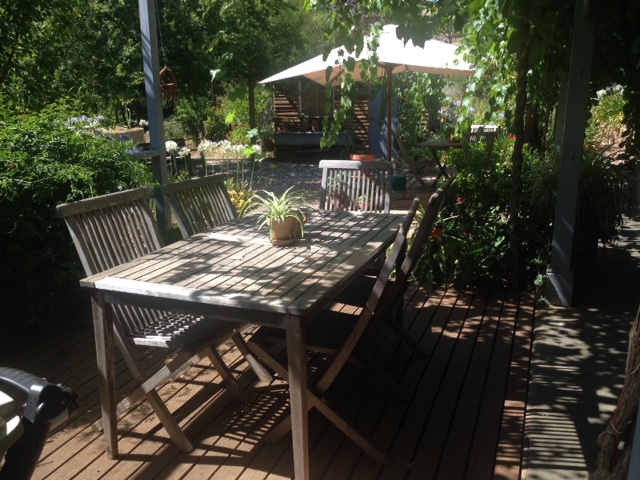 After a mild start to summer, our part of Australia is really heating up now.  The split system air-con that we had installed during renovations fifteen years ago, but have rarely used, had a couple of runs last week.  This 106 year old house is solid stone and surrounded on three sides with wide verandas covered in Glory Vine (Ornamental Grape) so it retains its cool for a few days if we keep it closed up during the heat of the day and open it up when the outside air is cooler than inside.
The ceiling fans get a good workout, as do a couple of free standing fans to focus on the parts that the ceiling fans don't reach, and they cost only a pittance to run.  But when the temps are soaring between 36deg and 42deg for more than four days in a row the walls start to warm up. I'm so very thankful that the air-conditioning is there, when we really need to use it. 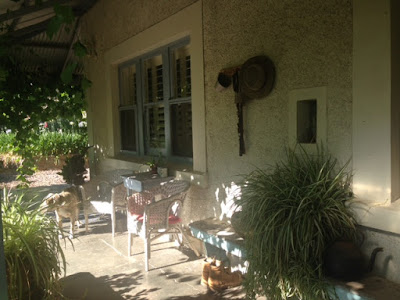 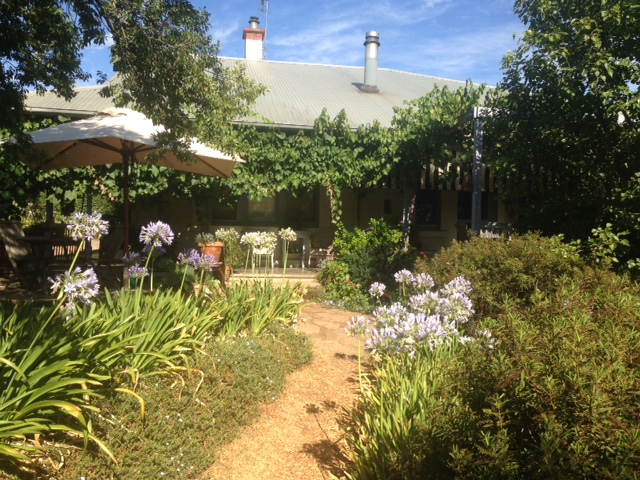 Brian keeps plodding along as he doesn't mind the heat, and his jobs list is always long. I draw the line at cutting chaff, mowing lawns, mending fences and digging the garden on hot days, but I admit I'm getting a bit lazy these last couple of years and have learned to prioritize tasks. However, when there are livestock involved, there are times when fence mending and animal maintenance has to be done in all weather. 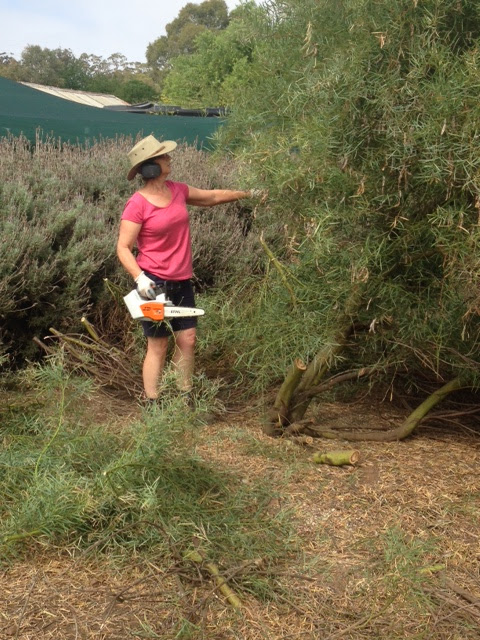 We hired a commercial size shredder over the New Year long weekend and removed a row of nine Flinders Range Wattles that were past their best. Planted in 2004 as a wind break for our main vegetable patch, the roots were beginning to invade the vegetable plots and we had plans for planting a double row of bee loving trees in their place.
A nice pile of firewood and lots of lovely mulch that I've spread along the paths throughout the gardens. In winter time the garden paths in the house yard become dangerously muddy and slippery, so wood mulch is the best material at hand for this. 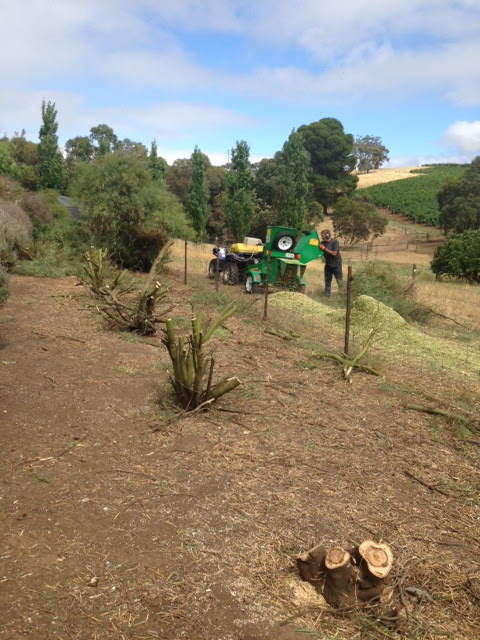 Halfway there, just the stumps to go. 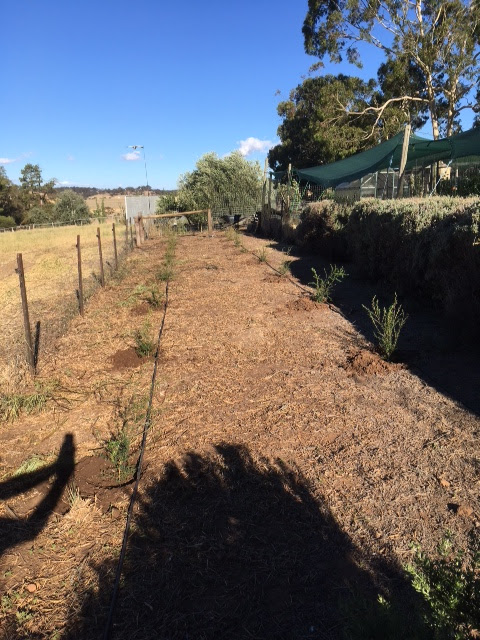 A double row of Leptospermum Scoparium (Manuka) for the bees to produce some Australian (Manuka) honey. This is a fenced lane that joins part of the poultry yards, so it has been temporarily fenced off until the little trees are tall enough to withstand chooks scratching around them. 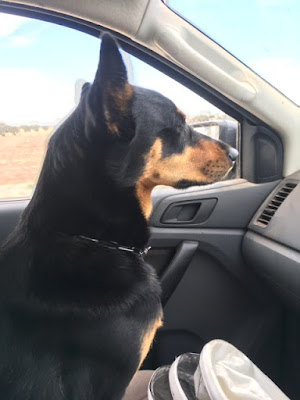 Between naps on the front seat, (drivers side door is open) Meg is on the lookout for any geese or chickens that might cross the line and enter the work zone. 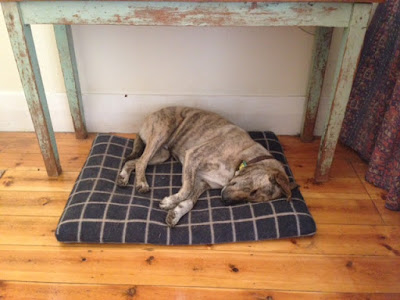 It was just too hot for the foreman. 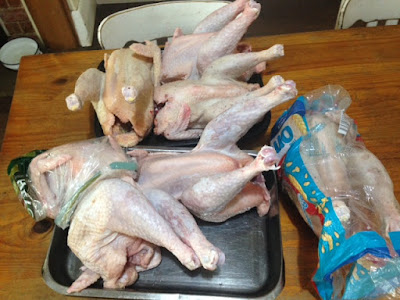 The following weekend it was cool enough to process sixteen of the chickens from our last incubation hatching a few months ago.
There are roughly twenty left to process, when time permits and the weather cools off a bit.
Just in case you're thinking I'm some kind of marvelous farming woman, I might add that I'm not involved in this activity in any way except for packaging for the freezer, and later on, the cooking of said chicken after retrieving in a civilized fashion from the freezer.
Childhood memories of gagging at the smell of hot wet feathers while my father plucked a chicken for a special Sunday roast lunch, is still too off-putting, even after all these years. Well...that's my excuse anyway. ;-) 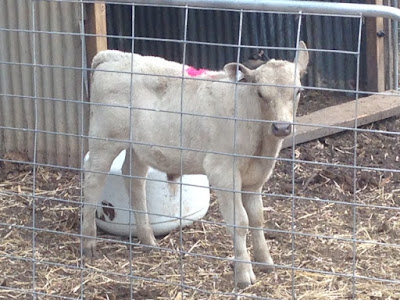 We attended three local livestock markets before surrendering to high market prices to buy this Murray Grey steer.  Cattle prices are staying high, which is great news for breeders.
We sold off our weaners at good prices last year, so that we could rest our home block for awhile. Now we need a few youngsters to grow on and ouch!!..it's a bit different being on the other side of the trade . Aiming to double our investment when we sell him again after eight months or so, is better than money in the bank. 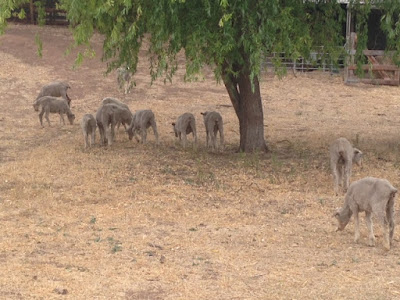 At the same market this pen of twelve Merino ewe lambs looked so malnourished and poorly we just had to buy them (cheaply) and bring them home to be properly looked after. After worming, vaccinating and on good dry pasture with access to minerals they have improved beyond recognition in just three weeks.
They will return our investment many times over with their lambs over the next few years. 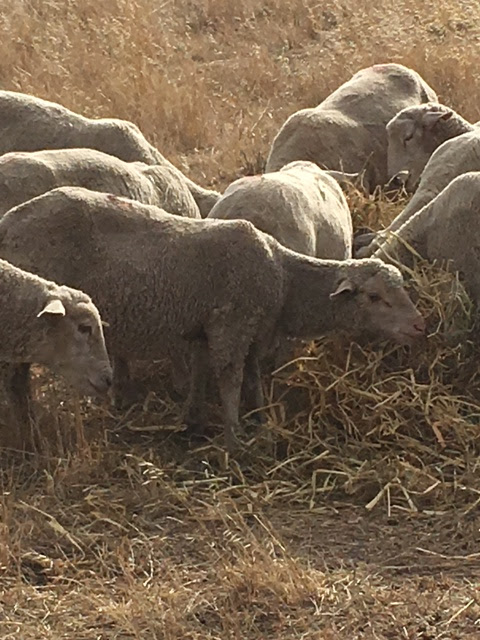 Do you remember Trevor? The little lamb that was my biggest challenge last winter, is now just one of the flock and has caught up in size to the other Merinos. He wanders over to say hello to me, but he prefers the company of his friends. Brian remains under strict instructions that this little guy will never be loaded up for market or the butcher. Luckily his Merino wool is of value, so I have a fair and balanced reason to keep him. ;-) 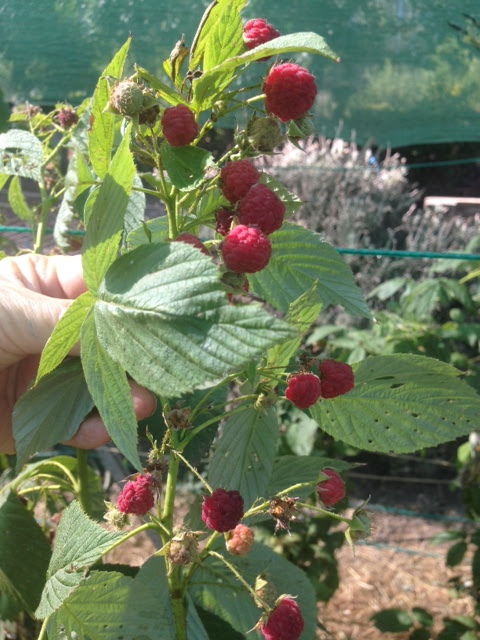 These raspberries need picking, and then the dogs and I will be retiring to the cool of the house today as it's already 32c degrees at 9am.
There are zucchinis to be made into relish and then, as it's Sunday, perhaps I'll work at that pile of library books on my desk.
Have a wonderful day friends, wherever you may be.