Sourdough - So you thought she was dead! How to revive your mother and not waste flour. 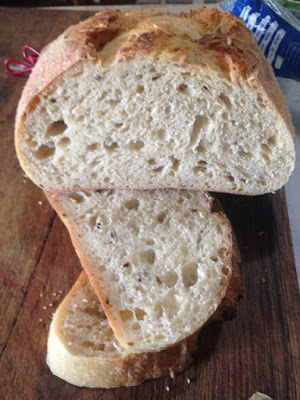 After many years of baking sourdough, with varying degrees of success - and failure- I've finally found the way that works for me. This is a huge breakthrough, after throwing in the towel a few times, I just could not let that elusive perfect loaf get the better of me.
I've tried many methods, with limited success, but could never be positive and confident that each loaf would turn out well.
We've been eating quite a few bricks along this journey, but I'm pretty sure those are behind us now.
In this post I'm going to show you;
How to revive a mother that you thought was dead;
and
How NOT to waste flour each time you feed her. 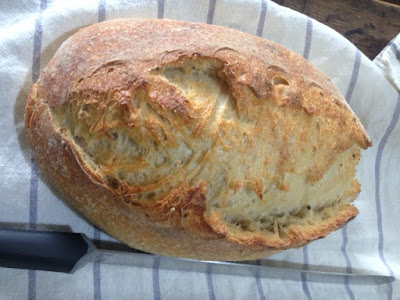 I know I'm not alone in this quest for a good loaf, so I'm going to share with you a condensed version of what I gleaned from many hours of searching on-line, speaking to other bakers, watching endless YouTube instruction videos and trialing more methods than I can remember.
This is not an instruction post on how to make sourdough for the complete beginner, there are hundreds of sourdough instructions on-line and in books that have all the relevant information about the basics.
I'm a huge fan of Celia from Fig Jam and Lime Cordial's sourdough recipes and this superb tutorial.
I highly recommend you watch this to learn the basics.
Rather, this is a troubleshooting correction of what I was doing wrong. Maybe I can point you in the direction of that light bulb moment of  successful loaves too.
I'm assuming that you are already familiar with, and in possession of, a reliable starter/mother, and you know how to look after her.  Here is Celia's excellent post about how she cares for her mother that she has named Priscilla.
To prevent confusion I'll call her 'mother' from here. 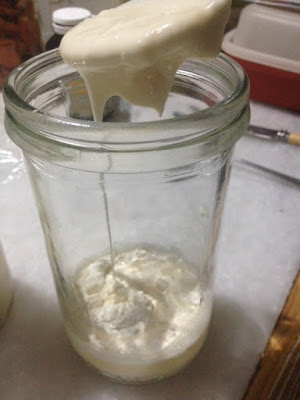 I keep my mother in one of these wide mouth jars and store her in the fridge, covered loosely with plastic cling wrap, waxed cloth, or a loose fitting lid.  She sometimes sleeps for two or three weeks, completely neglected. 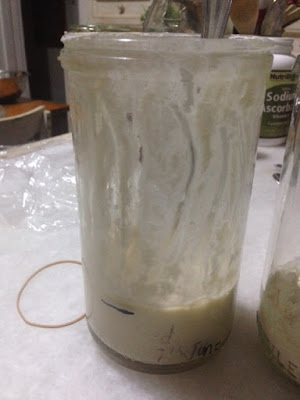 You thought she was dead!
If I've forgotten her been away for a few weeks, and she is smelling odd and covered with a dubious dried out crust or a watery grey substance, I know I can revive her.
Simply scrape off the crust and discard, or if there was no crust, but a watery layer on the top, just stir it into the mixture.
Spoon out a heaped dessertspoon and put into a clean jar, feed her with equal amounts of flour and water (1/4 cup of each), stir well, cover loosely and sit on the kitchen bench. 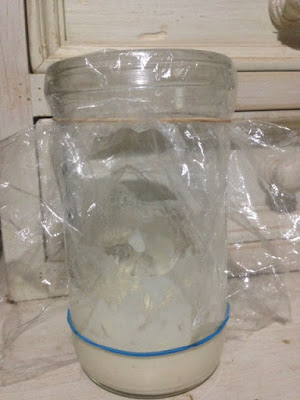 After five to eight hours there should be signs of life. Always put a mark on the outside of the jar so you can see if it has risen and how far. You may need to feed her again if she is really sluggish, and usually she will be back to her normal bubbly self within 24 - 48 hours.
I keep approximately one cup of mother in my jar. That's all.
I do have a spare jar of mother in the freezer, just in case..... you know.... you never know what's around the corner and yes I'm one of those people who usually has a spare of  most things.

How NOT to waste flour and water every time you feed your mother.
One thing I didn't like about sourdough, was wasting all that flour and water when feeding my mother every day. All the instructions tell us to discard half, and feed with fresh flour.
I Hate Wasting Anything! I felt very bad tipping that into the compost and lets face it, how often do we really want to be cooking up pancakes, flat bread, crackers or cakes to use up the discarded portion of sourdough mother? As much as I love all those things too,  I rarely have the time to add that into my schedule.
Some of my friends have given up baking sourdough because of that waste, (and baking bricks heavy bread constantly didn't help either.)
So here's what I do now.
I bake a loaf at least twice per week, so my mother is being refreshed often, but she remains in her jar in the fridge. When I want to bake a loaf I prepare a bowl of sponge the day before. 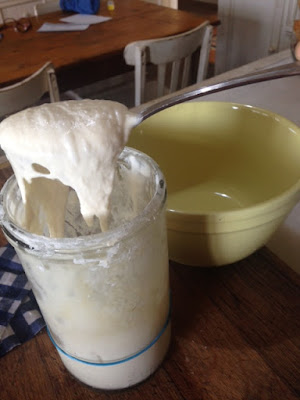 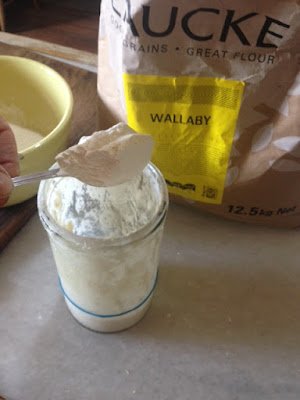 Cover the jar loosely and return mother to the fridge. No need to keep her out on the bench, just put her straight back into the fridge. 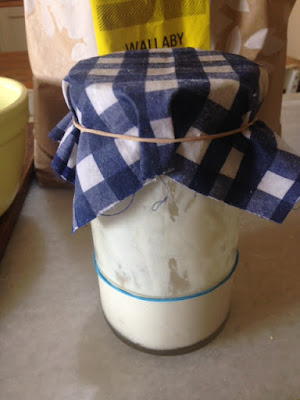 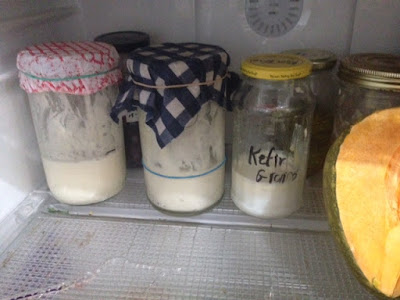 Mother has been fed, covered and returned to the fridge. 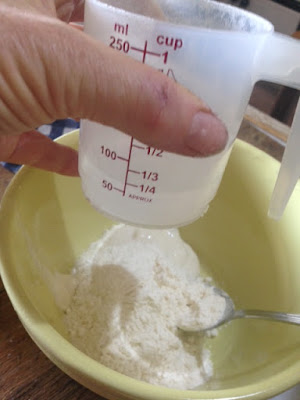 The small bowl is now where the action is happening today. This will become our sponge.
Feed the small amount of mother in the bowl with 1/4 cup of flour and 1/4 cup of water.
Stir to combine, cover loosely with plastic cling wrap or waxed cloth, and place in a warm spot. If your kitchen is warm, the sponge will be happy to do its thing on the bench. 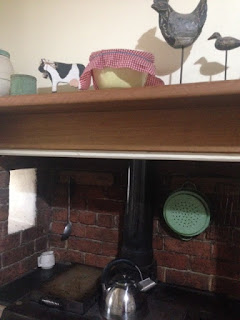 Mother has made a sponge, which sits in the bowl above the fireplace to assist activation. 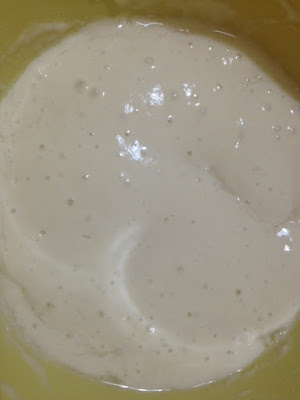 12 - 1pm  A few bubbles have appeared on the surface. Feed again with 1/4 cup flour and 1/4 cup water.  Combine well, cover loosely and replace in a warm spot. 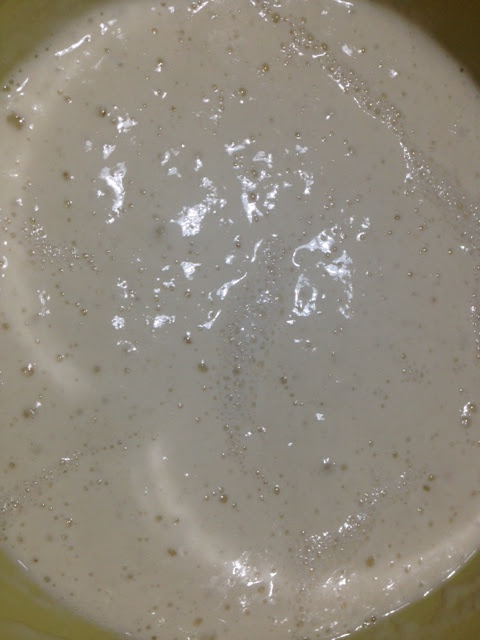 4 -6pm The sponge should be quite bubbly and now it's time to mix up the loaf, but do a float test first.
Slide a teaspoon of sponge into a glass of water. If it floats it's ready to use.
Never try to make a loaf with sponge that doesn't pass the float test. 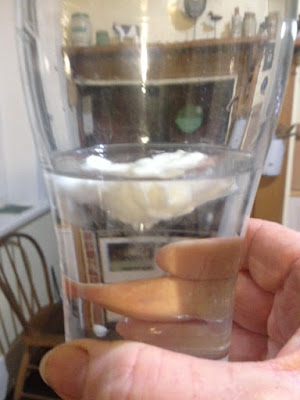 If the sponge does not float, it will need more time in the bowl. Try again an hour later, or it may be too sluggish and need another feed of 1/4cup flour and 1/4 cup water. Wait another couple of hours before moving onto the next step. My mother always makes a good sponge that is ready to use at this stage but some mothers are a bit slow to get going.
Assuming your sponge has passed the float test; it's now ready to mix a loaf.
In my next post I'll show you my new (to me) stretch and fold method and how to rest and bake the loaves in the way that works for me in my kitchen, with the utensils I have on hand.
Here  and here  are some other great blogs that have helped me understand the the science and magic of sourdough.
So do some reading and I'll see you back here in a day or two with the second installment.
Once again, I remind you that I'm no expert, but this is my adaptation of a mix of all these sourdough recipes and methods that works for me.
If you live around here in the Barossa, and you would like to get started on your own sourdough addiction journey, I'm very happy to supply you with some of my mother/starter.
Cheers,
Sally XX